A friend of mine recently expressed an interest in short stories. Seeing as it was my introduction to the modern short story, Black Static was the natural choice. And it was this freshly finished issue which I proffered.

Thirty issues have gone by since my first issue , and a lot has changed. But the fiction hasn’t. My first real introduction to the cutting edge of modern horror was through those pages, and every two months the stories still snap with fresh ideas and new names.

The reason for this little spiel is this: you should buy Black Static. You should buy its SF sister magazine Interzone, too. I subscribe, which takes away the pressure of remembering to buy them every two months, and you should consider that too. If you love horror, you’ll love this. If you don’t love horror — well, maybe this will change your mind.

The other purpose of this little introduction is to point out that I don’t currently hold in my hands the current issue — so form an orderly queue to point out corrections please!

END_OF_DOCUMENT_TOKEN_TO_BE_REPLACED

Do you want to know a secret? Writing the introduction to a review is my least favourite part of the whole thing. It’s rare that I won’t know what I think of a film or story, and if I don’t know starting out where I’ll finish up, the very process of writing it tends to steer me towards one.

No, it’s the introduction. The watching the wordcount as I ramble on, wondering if I’ve done so enough that I can just jump onto the meat of the matter. I’m impatient, basically. As a kid it was the oversweet luxury of desert that I craved, and that has never really gone away.

Black Static, as ever, is the best magazine in the horror business. Certainly in the UK. Probably in the world at large. It has been a part of my diet since my student days, lounging in halls on lazy afternoons when I should have been writing essays, getting lost in worlds of darkness and monsters.

I’m not much of a marketing shill, but if you are at all interested in modern horror — or explorations of the human soul — then you could do a lot worse than a subscription to Black Static. I don’t profess to like every story, but I’ve yet to read one from which I haven’t taken something away.

Is that enough of an introduction ? (Yes, that’ll do – Ed)

END_OF_DOCUMENT_TOKEN_TO_BE_REPLACED

As with my Interzone review last week, I’m afraid I have missed an issue of Black Static in my reviewing quest. Unforgivable, I know. But I’m back to it this month, and ready to give my thoughts on the stories and non-fiction within.

One thing I will say first, though, is just how striking the artwork is. Black Static usually does showcase some of the very best each and every week,  but to my mind issue #34 is particularly bold. From the electrically chilling cover artwork (by Ben Baldwin), to the images for each if the stories. Joachim Luetke’s deeply chilling KKK-esque image for Sean Logan’s story “The Tower of Babel” is particularly deserving of mention, especially from a name I don’t think I’ve encountered before — and worth checking out.

But anyway, you all came here for the reviews of the stories, didn’t you? So let’s get on with the show!

END_OF_DOCUMENT_TOKEN_TO_BE_REPLACED

In all the fuss over the by-election, it must look from my blog like I’ve forgotten all about my writings.

This isn’t, of course, true. A return to writing was one of the things I was most looking forward to about finishing my exams. In the period between Christmas and exam time, I had written no new stories, edited a couple, and made one submission.  Admittedly, that one submission has today been shortlisted for inclusion in the anthology (Huzzah!), but with no acceptances yet this year, I’ve felt a little unfulfilled on that front.

But since finishing, I’ve written four short stories, one more of which has been submitted. It feels very good, I must say. And, naturally, I’m still doing reviews for Tony Lee, on his sites VideoVista and The Zone. And now, I have two more reviews to boast about.

First is Sweatshop, a hacker/slasher/gorefest of a film, described by IMDB as: “A group of friends break into an abandoned factory in order to throw a impromptu party; unaware that it is not as empty as they originally believed.” Which is charitably brief, frankly. If you want to know what I thought of it in more depth, you can read it here.

Secondly, we have Universal Squadrons, a science-fiction/thriller based around a soldier back from serving in Iraq. Again, it’s not going to win any awards, but after Sweatshop, it was something of a breath of fresh air. Read my review here.

And that’s it. Nice and brief. Hopefully I’ll have more good news to report soon, but in the meantime I’m just enjoying being able to write.

Spring is well and truly here! The April issue of Tony Lee’s VideoVista is up and running.

And, you lucky people, it contains two reviews from yours truly! My first review is of Brain Dead, a “horror” film about six people trapped in a remote forest cabin by a plague of alien zombies. I kid you not. Secondly, I have reviewed more mainstream horror fare Paranormal Activity 2. Please read and let

me know what you think.

And once more, the ever-gorgeous A.E. Grace has contributed a review of Mexican cannibal film We Are What We Are. Check it out. 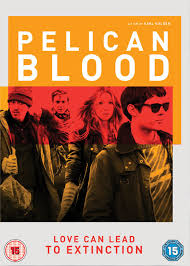 Pelican Blood - a romance, populated by indie morons, set in the bizarre world of obsessive birdwatching

Yes, it’s that time again. And my, what a busy month it has been!

This month I’ve reviewed three DVDs (of varying quality) for the pleasure of you lovely people. All available at VideoVista.

First up, we have Open House, a home-invasion thriller, dining off the success of TV show Trueblood. Next, we have a French gangster film, 22 Bullets, staring Jean Reno as a retired gangster who gets dragged back into the criminal underworld when he is attacked and left for dead. And finally, indie bird-watching romance Pelican Blood, which about says it all really.

And, in addition to all that, the wonderful A.E. Grace has reviewed an additional two films: Bedevilled and Mindflesh. Don’t we just spoil you?

Yup, it’s that time of the month again!

This month, in Tony Lee’s DVD review webzine, I have reviewed season 1.0 of Battlestar Galactica spin-off Caprica. It’s an interesting experience reviewing TV series on DVD, as generally people don’t tend to sit down and watch the whole thing in one go, as I end up doing.

But yes, you can see my review here, and please feel free to leave any feedback as a comment on this blog.

Yup, it’s that time of month again. The January issue of Tony Lee’s fantastic DVD review webzine has gone live, and it contains a review by yours truly.

This month, I’ve reviewed “found footage” style horror film The Last Exorcism, for all of you lucky people. This film sees a disillusioned priest and exorcist, who decides to do one last job and allow a film crew to see how he does it, in order to expose the shams. Or at least, that’s the plan until strange things start to happen with his final case.

Please take a look at my review, and at all the others. And I’m always pleased to hear what you think, if you want to comment on this blog about it.

Also, I’ll have another review coming up on Tony Lee’s other review webzine, The Zone, shortly- so keep an eye out for that.

I almost missed/forgot this in all my political outrage lately, but I have a review up on Tony Lee’s the Zone webzine.

The review is of horror/thriller Stag Night, which sees a group of testosterone-fuelled man-apes out on the aforementioned farewell party for bachelorhood. At least until they find themselves stranded in a disused Manhattan subway station, being chased by cannibalistic psychos. So a fairly standard stag do then.

The ever-beautiful, ever-talented, ever-wonderful A.E. Grace also has a review just gone up on the Zone, hers being of classic horror-fare Black Christmas (the original, not the remake), so make sure to check that out too.

Yup, it’s that time again. The November issue of DVD review webzine has gone live, with another three of my reviews in it.

This time I’ve reviewed Season 6 of US medical drama House, ITV’s human tragedy (no, not Jeremy Kyle) Bouquet of Barbed Wire, and sea-monster mockbuster Mega Shark of the Malibu.

many months, so please feel free to look up my Mega Piranha review from last month and compare the two. I’d very much welcome any comments.

Oh, and A.E. Grace contributes another two reviews this month, reviewing budget horror films Blood Snow and Death Tube (which will be forthcoming on Tony Lee’s other webzine, The Zone, so keep your eyes peeled for it).

This blog is hosted by WordPress and any election related statements are promoted by Matt Dent on behalf of Labour candidates in Southend, all of 268 Sutton Road, Southend-on-Sea, SS2 5ET.